Dick DeVenzio gave his life to the intelligent pursuit of excellence in sports, and his unique way of articulating common sense teachings intelligently and humorously was — and continues to be — quite UNcommon in the basketball world.

The son of a very successful basketball coach, Dick grew up wanting to be a basketball star. That led to daily schedules and all-day practicing by the time he was in the 7th grade. Although Dick was only 5’9″, he averaged 30 points per game at Pennsylvania’s Ambridge High School and led his team to an undefeated state championship. Parade Magazine named him as the best high school point guard in America in 1967, and awarded him with a spot on their First Team All-American squad. Coaching legends Bob Cousy, John Wooden, Chuck Daly, Dean Smith, and many others made recruiting visits to his house, and Dick ultimately accepted a scholarship to attend Duke University.

As an English major and starting point guard for the Blue Devils, Dick earned First Team All-ACC Tournament honors in 1969, and was named a First Team Academic All-American. After graduating from Duke, he played and coached professional basketball in Europe and in the Caribbean for nearly a decade.

In addition to being a successful student-athlete and coach, Dick was a tireless advocate for the empowerment of college athletes. He once said that one of his greatest goals in life was to bring about major changes in the NCAA, the organization which he jokingly liked to call the National Conspiracy Against Athletes.

In his relentless fight for NCAA reform, Dick wrote hundreds of magazine and newspaper articles and frequently appeared on national television shows such as “60 Minutes” and on ESPN. While he might not have seen much payoff for his efforts during his lifetime, those efforts helped to lay the groundwork for the changes that are beginning to be seen in college sports today. As in so many things in his life, Dick was simply ahead of his time.

As impressive as Dick’s accomplishments were as a student-athlete, coach, and advocate, his books and the Point Guard College program he founded in 1993 are what truly define his legacy. He published seven books in his lifetime, including the best-selling STUFF Good Players Should Know, the book considered by many to be the most useful and insightful basketball book ever written. And, in 1993, he created what he called his “dream camp,” the now nationally acclaimed Point Guard College.

Dick DeVenzio died on May 19, 2001, at the age of 52, just six weeks after he was diagnosed with colon cancer. More than 10 years after his death, the ideas, beliefs, and convictions that he lived by and that he passionately tried to impart to others have continued to influence and inspire countless coaches and athletes.

He is truly missed, but he will never be forgotten. 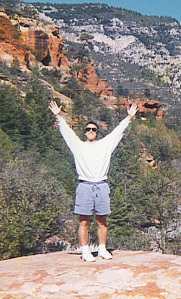 What People Had to Say About Dick…

What made [Dick] so special to me was that he was such a successful basketball player despite his relatively short stature. That, and the fact that he always seemed like an ordinary person, not an unapproachable star athlete like so many others. He seemed comfortable being who he was, whether he was on the court in a close game or walking across the quad on his way to class. Further, his rep was that of a relatively serious student, not just a jock. In fact…during his junior year he wrote a substantive and very articulate piece for the yearbook about the pressures of being a basketball player at Duke.“

–from “A Tribute to Dick DeVenzio,” written by a classmate of Dick’s at Duke

“Dick, I truly feel you did a fine job on your book…I was very impressed.”

“Dick DeVenzio has a unique and creative ability to explain the fine points of basketball. I sent my own son to Dick’s summer camp to give him the opportunity to learn from Dick, and I strongly urge all basketball players to read his many excellent tips and ideas.”

“I knew the late Dick DeVenzio for more than thirty years, and his legacy lives on in this classic book (Stuff Good Players Should Know). It is the ultimate guide to playing the game ‘the right way.’”

“I don’t know anyone better than Dick DeVenzio at teaching the fine points and the psychological aspects of the game.”

“Dick, I can’t say enough about the value of your teaching and your insights into the game of basketball. You have made me feel a lot more comfortable coaching.”