Coach DV on Excellence and Consistency

Here’s an excerpt from There’s Only One Way To Win, a book Dick wrote about his dad, the legendary Coach Chuck DeVenzio, better known as “Coach DV.”  Dick played for his dad in high school, where their undefeated 1967 Ambridge team has been called the best in Pennsylvania history. 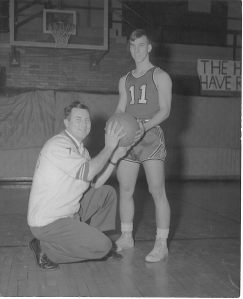 This piece begins after Dick tells a story of a victory for Coach DV that left him disappointed because one of his athletes gave the officials and the opponent an opportunity to call a foul in a crucial late game situation.

For example, in this scenario, Coach DV knew that Bigsy might very well have fouled the shooter if that shooter had been a cleverer player who knew how to play basketball. The shooter that Bigsy had missed by four feet hadn’t really thought of drawing a foul. He was just trying to get three more points for himself in the post-game box score. But what if the player had been a bit faster and stronger, a real winner, the kind of kid who looked for an edge and would try to suck a big, clumsy kid like Bigsy into fouling him? What if they had been playing against a Joe Petruny, the little point guard who had handled the ball for Coach DV for three years, who knew how to think the game? Petruny would easily have been able to get Bigsy to foul him. What no one but Coach DV really understood was that Bigsy had been willing to get in the way and willing to foul; he just hadn’t had the opportunity. The opposing player hadn’t given him the opportunity to make the mistake he was willing to make.

This was another cornerstone of Coach DV’s insight into basketball. Most players are very willing to make mistakes, but you have to give them the opportunity to make the mistakes they are willing to make. It gets to sound almost like double talk, but it made perfect sense to Coach DV.

There were dozens of obvious points like that. Coach DV understood them all in the moment, and they guided every move he made. If fans and players went home thinking he was crazy for the way he yelled at his team after a victory and the way he chewed out a kid who hadn’t gotten within four feet of fouling at the end, so be it. They didn’t understand the game the way he understood it. They didn’t understand the true meaning of excellence and consistency.”